FIELD NOTES: Under the stars 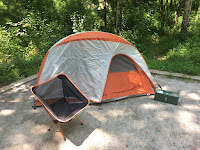 One of the “casualties” of the pandemic for me has been, oddly enough, camping. While spending time alone in the woods is the very definition of “social distancing,” the “getting to the woods” part has been a little more challenging. Early in the pandemic, state parks were closed to visitors for several weeks, and when they did reopen, it was often with strict limits on the number of people admitted at any one time. Coupled with an increased demand from families looking for something safe-ish to do, this often meant ridiculous lines even to enter the park gates, let alone score a campsite.

During one attempted visit, I was informed the wait to enter the park was two hours because “we can only allow half the number of cars in the  parking lot.” This only makes sense; the link between airborne disease transmission and the proximity of parked cars is undeniable.

This past weekend, however, for the first time in over a year, I was able to pack up the pickup and head to South Mountains for an overnight trip with my dog. This trip was Millie’s first night under the stars, and you never quite know how a dog will react to a new situation. The first time I took Laika camping, she was just as happy as could be romping through the forest, right up until it started to get dark, then she looked up at me expectantly with eyes that said, “Okay, daddy, we can head back to the house now.” When I didn’t respond to that, she looked around and gave me another look, “SURELY YOU DON’T MEAN WE’RE STAYING OUT HERE ALL NIGHT!!!” Laika is not a great camp dog. I had high hopes for Millie.

It is hard for me to pitch a tent without thinking about my first camping experience. My family was not into camping. While my father was an “outdoorsy” person, he had little desire to spend the night in a tent, suggesting that his last overnight campout had been in northern France in 1945 and wasn’t much fun. Accordingly, my early camping adventures consisted primarily of pitching a tent in the backyard, staying out there until I got cold, antsy or scared, and retreating to the comfort and safety of my bed. Eventually, though, I graduated to spending the whole night outside.

That first tent was a green and yellow canvas tipi-style from the Sears catalog that smelled musty no matter how long it aired out and was insanely difficult to put together. It was probably more of a “play tent” than a legitimate camping shelter, but I got a few summers out of it before it disintegrated into a mass of moldy tatters.

My next notable camping experience was the infamous “pizza” trip of 1987. Originally, Janet and I planned to go camping on our honeymoon but ditched that idea at the last minute in favor of a trip to Put-In-Bay. To atone for this, we did our “honeymoon” camping itinerary to celebrate our first anniversary. We drove down to Mohican State Park and pitched our tent in the middle of an open field haphazardly divided into “campsites” with chalk lines. After an exciting day of hiking and canoeing, we returned to the site to find that dozens of other campers had set up their tents all around us. It was about as scenic as a Walmart parking lot. We had planned a big campfire with hot dogs and s’mores, but the place was so dismal I said, “Screw it,” walked to a payphone, and called in a pizza order for delivery. And now, every time I tell Janet I’m headed overnight to the woods, she can’t help but respond, “Yeah, I remember the time the great woodsman ordered pizza delivered to his tent.”

I do not relish camping for the sake of camping the way some, like my late sister Bonnie, did. She and her family would spend a week every summer at the same campground. She eventually even bought a camper and extended the trip to two weeks or longer. I’m good for two or three nights, max, then the logistics of the experience start to catch up with me. Not  enough food. Not enough water. Not enough clean underwear. The truth is, I see camping as more of a means to an end – getting out on the river earlier or a head start up the mountain – than as an end to itself. Still, a night under the stars with the crickets chirping and the earthy smell of the forest is something I need to do now and then to recharge and refocus.

Millie did fine, by the way. She was a little apprehensive about going in the tent initially but settled in nicely after a few minutes. I may finally have found the camping buddy I’ve been looking for all these years.