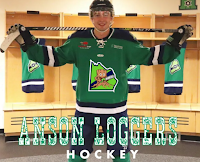 Woody Sports Entertainment announced today that Wadesboro, N.C., has been approved as the newest franchise in the Southern Professional Hockey League (SPHL). The team, which will be known as the Anson Loggers – a nod to the region’s forestry and wood products industry – will begin play for the 2022-23 season at the new Peaches ’n Cream Ice Arena in Wadesboro.

The SPHL currently has teams in 11 cities across the South and Midwest, including the Marksmen in nearby Fayetteville. “We’re especially excited to see how that rivalry develops, seeing that the cities are less than two hours apart,” said Loggers General Manager Bulge Davenport.

The Anson County team will play at Peaches ’n Cream Ice Arena, formerly the Wadesboro Walmart Supercenter. “When the building became available last year, we thought, hey, that’s about the size of an ice rink, and the rest was history,” said Davenport. The arena is named for the nearby roadside attraction which signed a multi-year naming rights deal reportedly in the triple digits. The arena will seat 14,340, making it the largest venue in the SPHL. Davenport expressed confidence that the team can fill the arena, noting a survey they conducted in which more than 50 percent of county residents correctly identified hockey as ”that game where fights break out while people are skating.” An additional 20 percent knew that a Zamboni was not an Italian dessert.

Davenport admits that launching a sports franchise in the midst of a global pandemic was challenging. “We sent in our application, along with the required proofs of purchase from 10 12-packs of Busch Light, to the league office in Huntersville last March, just as COVID was becoming news. We didn’t hear anything back for a couple of months and figured they didn’t  want us, but then out of the blue we got a letter saying we were in.”

Anson Loggers team colors will be forest green, cobalt blue, and electric mist, and the primary logo will be a chainsaw-wielding tree stump outlined by the shape of the county. For information about tickets and merchandise, please call 1-800-APR-FOOL.