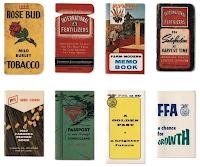 If you have ever tried Googling my writing, you are probably aware that the term “Field Notes” is not unique to my weekly column. It is, in fact, the name of a printing company in Chicago that produces a series of pocket-size notebooks with very cool cover graphics. Although I use that company’s products, and many of these columns originate as ideas, notations, and doodles in the pages of those notebooks, that’s not where the name of my column originated.

In my short story “The Bug Jar” from my first book, “The Bug Jar and Other Stories,” the protagonist, a young boy named Josh, keeps a journal of his “experiments” on lightning bugs in a spiral notebook. On the cover, he has carefully printed the words “Field Notes.” I have no idea why I chose those particular words, although I suppose I was trying to represent his scientific aspirations. That story was written in the late ’90s, long before I knew of the notebooks. Indeed, the printing company wasn’t established until 2007, so there is no way I could have subconsciously channeled that brand identity into my work.

The Field Notes brand owes its name to the small notebooks given free to farmers as promotions by agricultural supply companies through the latter part of the 20th century. These roughly 3″ X 5″ booklets, which often featured elaborate cover art, slipped quickly into a shirt pocket and helped keep track of important information around the farm: weather, rainfall, planting dates, prices, etc. The inside of the covers often contained information relevant to the product or service promoted. A fertilizer company, for instance, might include a chart showing the standard application rates for different types of crops, or a manufacturer of drive belts might print part numbers and sizes. It’s easy to imagine these booklets in little stacks on the counters of local co-ops and feed stores or being handed out by salesmen as they visited farm after farm.

Field Notes, the printing company, has an entire page on its website devoted to displaying its impressive collection of these booklets. While some of the older ones are very basic, with just the company name and the word “Memo” or “Ledger” printed on the front, the ones from the ’40s and ’50s are a master class in mid-century graphic design with bold colors, beautiful logos and detailed illustrations. A few are even die-cut to represent the product’s shape, like a snuff can or a tobacco leaf.

With fewer young people finding their way into farming and corporate agriculture and automation threatening to all but eliminate the small family farm, looking back on these notebooks and the lifestyle they represented is a bittersweet experience. Farming has never been a glamorous endeavor, and it’s certainly not an easy one, but less than 100 years ago, one-third of the U.S. population earned their living from the land. That number today hovers around 1 percent. The average farmer today is nearly 58 years old – sobering food for thought.