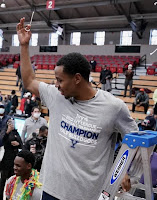 On Sunday, the Yale Bulldogs defeated the Princeton Tigers to win the Ivy League basketball tournament and secure their berth in the “Big Dance.” The team proudly donned their brand new Ivy League Champions T-shirts, cut down the nets and posed for media photos. There was only one teensy problem; the shirts were misprinted, badly misprinted. Instead of Yale Bulldogs, they touted the champion Yale Bulldgods. You might say it’s a little bit of an embarrassment for one of the most prestigious academic institutions in the country to misspell its nickname, but of course, the school had nothing to do with the mistake. I am guessing some quick print shop got the late-night order at the end of the semifinal round and was tasked with producing a couple of dozen champions shirts for both Princeton and Yale. It’s surprising that such an obvious error could slip through, but I know from personal experience it’s tough to proofread your own work because you KNOW what you meant to say.

The Yale gaffe is certainly not the first time a spelling error has made its way onto the field or the court. There’s an entire website, Uni-Watch, devoted to tracking such occurrences, and they are far more common than you might expect. But generally, it just is a matter of a missing letter or two letters switched, so you might expect “Buldogs” or “Bullgods” (and can we all  agree that “bull gods” would be a pretty cool nickname), but it seems like whoever made the Yale mistake went out of their way to both insert an extra letter AND switch the order of the “d” and “g.”

Other errors are more subtle. In the lead-up to heading off to college, I was poking around the King Liquidators in my hometown. King Liquidators was a sort of a low-brow Big Lots that featured factory seconds of already second-rate products. You could occasionally pick up a pair of off-brand jeans with a pocket sewn on at a slightly funny angle or a pack of underwear with red dye stains on the back (hey, who’s going to see them anyway?). On that particular visit, I came across a New Philadelphia high school shirt. Now, I didn’t live anywhere near New  Philadelphia, but the shirt was pretty cool, red with a black shoulder yoke and two white stripes on each sleeve. “New Philadelphia Quakers” was printed in black and white script lettering on the front. Or at least it should have been. The shirt actually said “New Philadelphia Ouakers.” Still, for 50 cents, I figured I couldn’t go wrong.

I hadn’t counted on there being people from New Philadelphia and its surrounding area at the college. A surprising number of people. When confronted with the question, “Oh, are you from New Philadelphia?” the answer, “No, I bought this at a liquidator store for 50 cents, see Quakers is spelled wrong,” earned me some odd stares.

So, I eventually pivoted to “No, my uncle gave it to me.”

“Oh, does he live in New Philadelphia?”

“No, I think he got it at a liquidator store; see, Quakers is misspelled.”

At least I didn’t lose my job over it. A couple of weeks after I moved to Charlotte in 1995, the city was rocked by a major controversy. A local sporting goods store ran a winter clearance ad in the Charlotte Observer that promoted a special price on Rossignol ski boots, complete with an illustration and the tagline, “You’ll ski like a f***** in these boots.” Anyone who’s ever done graphic design or written ad copy understands precisely what happened. The ad guy cut and pasted images and put in “dummy” text to get the spacing and alignment right and either forgot to fix the text before sending it or accidentally sent the draft version. Even in that context, the use of that term was inappropriate and he was justifiably fired, but still, you can see how it happened.

This brings us back to the Yale Bulldgods. Once the picture of a Yale player cutting down the nets in the misbegotten tee went viral on the internet, orders began pouring in for the shirt, the misprinted shirt. Many of the callers to the order hotline specifically said they wanted the misspelling. It has become a fashion statement. Kind of makes you wonder if there will be more of these “accidents.”