FIELD NOTES: I yam what I yam 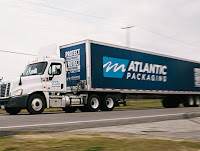 It is common to see semi-trailers emblazoned with "Atlantic Packaging" chugging down U.S. 74 through Wadesboro. But I was under a misconception about these trucks until just last week.

In 1994, as my wife and I were beginning to seriously consider moving to North Carolina, I acquired a list of Charlotte-area businesses from the Chamber of Commerce and sent out a couple of dozen letters along with my resume to gauge potential employment opportunities. The companies I solicited were large and involved in industries I thought would be interesting. It's important to remember that the internet was in its infancy in the mid-'90s. There was no Indeed or Zip Recruiter, or even LinkedIn. The generally accepted way to get your name out there in a city far from home was to send a nice resume package to companies, more or less at random.

One of the companies on my interest list was Atlantic Envelope. Most people probably wonder why an envelope company would interest me; it's not the sexiest of sectors. But I was an avid reader of sales and motivational books by such authors as Zig Ziglar and Harvey Mackay. Mackay had famously worked his way up through an envelope company, and many of the practical examples in his "swimming with the sharks" books were based on those experiences, so to me, the envelope industry seemed, if not cool, at least familiar. I never heard back from Atlantic Envelope; in fact, out of perhaps 30 letters sent, I received no bites and just a handful of courtesy "we'll keep your information on file" responses.

I had always assumed that those Atlantic Packaging trucks were the corporate evolution of Atlantic Envelope. It made sense. With the rise of email and low-cost laser printing, the printed envelope industry has probably faced hard times, and the technology is similar enough to consumer packaging to make the transition. But it turns out that is not the case. Atlantic Envelope went out of business in 2005, and Atlantic Packaging is an entirely different company that shares a similar name and logo.

Another of those "cold call" letters went to a company in Gastonia called Pharr Yarns, or at least I know that now. The listing of businesses I got from the Charlotte Chamber contained pertinent information on thousands of companies, and as a result, the printing was very small. So small that an "r" and an "n' right next to one another might appear to be an "m." And that's how I sent a letter expressing my interest in a job to a company I thought was called "Pharr Yams."

I didn't keep a copy of the letter and don't recall precisely what I wrote, but based on the template I was using, the first line was something like, "Based on my long-standing interest in tubers, I am inquiring about a position with your outstanding yam operation."

I have a sneaky suspicion that a framed copy of my letter is on display somewhere in a hallway of the Pharr corporate offices.

But that's not the end of the story. Many years later, I was speaking at a community college event, and one of the other speakers on the panel was the CEO of Pharr Yarns. I couldn't help myself, dumped my usual icebreaker joke, and told the Pharr Yams story. Without missing a beat, the CEO responded, "I'm sorry it didn't work out with Pharr Yams, but I'm glad you found a job with Mitchell Community Collards." My kind of CEO!