Speaking on Community Gardening in Morven 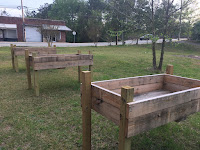 Yesterday evening, I spoke to a group of community volunteers at the Holla Center in Morven about launching a community garden. In addition to serving as the county’s economic developer, I am a certified gardening instructor and volunteer manager of the New Beginnings Moravian Garden in Huntersville. I will be helping the Morven volunteers get their project off the ground, starting with a load of compost next week.