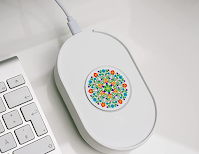 I saw a news story the other day about a woman who lost her remote-work job for installing a "jiggler" app on her company laptop. The headline read something like "Tech Worker Fired for Illicit Jiggling." I wasn't familiar with the jiggling app, but I assumed it must be something like Uber or Doordash, except catering to those who need to jiggle but don't have time to do it themselves. It turns out I was waaaaay off on that.

Jiggler apps are software that moves your mouse pointer in random directions, giving anyone monitoring your computer the impression you are hard at work when you are actually using the bathroom, getting a drink, or walking the dog. In the comments under the story, several people noted it was pretty stupid of her to install the app because tech companies closely monitor their networks, and unapproved software immediately raises a flag. They claimed it would have been wiser to use a mechanical jiggler.

My next step, obviously, was to check out Amazon and see what a mechanical jiggler looks like. There are a couple of different designs, but they are most typically oval pads that vibrate intermittently when you place your mouse on them. That there is a market for such a device pretty much sums up the state of remote work.

Elon Musk made headlines a few months back when he insisted Tesla and SpaceX employees begin returning to the office, saying those workers who wanted to continue to work remotely, "can go pretend to work for someone else." Malcolm Gladwell, an award-winning writer who admits he does his best work from his sofa and various coffee shops around New York, recently published an editorial saying it was time for workers to return to the office.

My feelings on the matter are nuanced. Like Gladwell, I think I do some of my best work from coffee shops, which may be why my office IS a coffee shop. But, I also see the value in communal work experience and socialization. While some work unquestionably requires a physical presence, many technical and professional jobs lend themselves to remote or hybrid approaches. There is no reason why an employee whose job is to write ad copy, crunch numbers, make phone calls, or design graphics needs to spend an hour of their day traveling to and from an office where they will sequester themselves in a cubicle. On the other hand, something is to be said for getting out of bed, showering, putting on fresh clothes, and presenting oneself to other human beings.

The COVID epidemic forced many employers to rethink the nature of work. Some realized that office towers in the center city are expensive relics of an era when secretaries took dictation and banged out letters on a typewriter. Others counted down the days until they could stop the silly Zoom nonsense and get everyone back in the same place at the same time. And there are a select few who would add to that sentence; so that we can keep tabs on them.

I once "heard about" a company with what many of its employees considered an unnecessarily restrictive and short-sighted policy. Although the employees of this company traveled extensively for work and were typically out of the office three or four days each week, the policy was that if you were in town, you had to be in the office. While in the office, employees wrote trip reports, got caught up on calls and emails, and worked on materials for the next week's visits. Nothing that strictly required a physical presence behind a desk after a grueling week of travel.

As a general rule, the company's clients did not want presentations on Fridays, so in most cases, it would have been possible for an employee to finish working on a project by 5:00 Thursday, drive to the airport, and catch a late flight back to Charlotte. But they were expected to be in the office at 8:00 Friday morning if they did that. However, suppose they arranged to have a quick breakfast with the client on Friday morning. In that case, they could justify working from the airport, taking an afternoon flight, and conveniently arriving in Charlotte just a "little too late" to go into the office.

There was nothing inherently dishonest about this. Building client relationships was an important part of the job, and a cup of coffee and a muffin at Starbucks was a legitimate work activity. But, when the cost of the extra hotel night and rental car day were figured in, it wasn't an outstanding bang for the company's buck.

I see the jiggler as being a little bit like that, an ethically murky response to a poorly thought-out policy. I had a roommate in college whose favorite quote was, "don't confuse activity for accomplishment." If a company measures productivity by how often a remote worker's mouse moves, they should hardly be surprised to learn their employees are finding creative ways to give them the activity they prioritize, not the accomplishment they want.