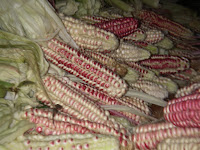 There's a good chance that when your family gathers (or gathered, depending on when you read this) around the table this Thanksgiving, one of the dishes set in front of you will be corn. Corn is arguably the most traditional Thanksgiving food, as it is one that we are sure was served at the original Thanksgiving in Plymouth in 1621. But the corn that the Wampanoag shared with the Pilgrims that day was very different from what you will put on your table.

Corn was cultivated by the indigenous peoples of North America for more than a thousand years by the time the Pilgrims arrived.  Originally a type of tall grass called teosinte with a dozen kernels no larger than the ball of a ballpoint pen, it was selectively bred over hundreds of generations until a handful of varieties resembling what we today call "Indian corn" were created. Technically, all corn is Indian corn since all of the varieties we grow today trace their roots back to those developed by Native Americans.

The corn most likely served at the first Thanksgiving is known today as Abenaki Rose. It is a type of flint corn grown by tribes throughout New England, Newfoundland, and Quebec. Flint corn, along with beans and squash - the Three Sisters - formed the basis of indigenous diets. Abenaki Rose kernels have a hard outer shell (hence the flint designation), with pink kernels typically forming bands or halos on the mostly pale yellow cobs. It has a much lower water and sugar content than the yellow and white sweet corn we usually eat today, making it well adapted to cold northeast weather.

Abenaki Rose and several other indigenous cultivars are available through specialty seed catalogs. The types most generally grown and sold commercially as decorative Indian corn are Pima White and Glass Gem. However, it is essential to note that all these corn varieties are edible. Because of the lower sugar content, indigenous corn cultivars tend to have a flavor that is often described as "nuttier" than sweet corn, and while occasionally eaten whole, it was traditionally ground and baked into "journey cakes," which were easily stored and carried.